The Trakehner breed is based on a small local East Prussian horse, the “Schwaike", with major influence of Arabian and Thoroughbred blood.

In the early 18th century, King Friedrich Wilhelm I of Prussia, the father of Friedrich the Great saw the need for a new type of cavalry mount for the Prussian army. The king wanted horses for his officers to ride, attractive enough to make them proud, solid enough to stay sound, with a comfortable, ground-covering trot that would enable them to travel quickly and efficiently.

So he chose the best horses from seven of his royal breeding farms, and in 1732 moved them all to the new royal stud of Trakehnen.
Horses born in Trakehnen itself were branded with the single moose antler on the right hind quarter, were as horses born outside the Trakehner Stud are wearing the double moose antler. 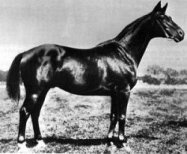 Trakehnen was the origin and centre of horse breeding in East Prussia.
Four studs (Georgenburg, Rastenburg, Braunsberg and Marienwerder) were annually supplied with young stallions from the main stud to spread the high breeding standard of Trakehnen all over the country.
The first stud book of Trakehnen was published in 1877 and the first stud book compiled by the East Prussian Stud Book Society, which recorded the horses of Trakehner origin bred by private breeders in East Prussia, was published in 1890. These are the books to which we still look today for authentication of pedigrees. 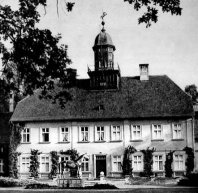 Through the latter part of the 1800s and up to the Second World War, the Trakehner was a most successful breed, excelling as a military and endurance horse, as well as proving its versatility by doing light draft work in the fields.

Trakehner horses have been triumphant in the 1924 and 1928 Olympic games. In 1936, “The Year of the Trakehner", the famous Trakehner Kronos won the gold medal in dressage, while Absinth won the silver. The gold medal in the three-day event that year went to another Trakehner, Nurmi. In the same year, the German jumping team competed at Madison Square Garden, United States and won the Prix des Nations with Trakehner Dedo!

Between 1921 and 1936, the Great Pardubice Steeplechase, next to the English Grand National the most difficult steeplechase in the world, was won a total of nine times by East Prussian horses.

But history was to deal the Trakehner a nearly fatal blow. The breed had easily recovered from their population being halved during World War I, but in October of 1944, as World War II was in its final stages and the Soviets were closing in on the lush and beautiful area around Trakehnen, orders came to evacuate the horses from the Trakehnen Stud.
About 800 of the best horses were hastily transferred both by rail and by foot, in a rather orderly manner, but unfortunately they did not go far enough west. Most of them, together with all their documentation, eventually fell into the hands of the Russian occupation forces and were shipped to Russia.

The private breeders and their horses, however, were not allowed to leave until January of 1945, when the Russians had broken through the last of the German lines.

What followed was a horror story that went down in history as “The Trek". Hitching their precious breeding stock to wagons laden with personal possessions and all the feed they could carry, these proud East Prussians fled, some 800 horses strong. They were mostly women, children, and elderly people, and they were leaving behind their whole lives, bringing along only what their wagons could hold. It was the dead of winter. Snow was deep upon the ground, and the broodmares were heavy with foal. Many horses were left behind to be claimed by the advancing Soviets and many were lost or let loose along the way to be eventually taken in by the conquering troops or to die.

The East Prussians headed west, literally running for their lives. They could not stop when mares lost their foals or horses went lame or became ill. Their feed ran out and the horses had to live on what they could scavenge along the way.

For two and a half months and 600 miles the nightmare continued,
while the refugees were constantly pursued by Soviet troops and strafed by Soviet planes. At one time, it looked like the East Prussians had reached the end. The Soviets had them surrounded on the shores of the frozen Baltic Sea. The only escape was across the treacherous expanse of ice, so across they went at times knee deep in the water covering the ice galloping to stay ahead of the ice breaking behind them. If any dared to stop or attempt to dodge the fire from the Russian planes overhead, they were doomed to sink helplessly into the freezing water. Many did not make it across. At last the survivors limped into West Germany, the once proud and beautiful 800 horses reduced to less than 100 pitiful skeletons, carrying open wounds from shrapnel, and with burlap bags frozen to their feet because they could not stop to replace lost or worn out shoes, even if they could have been located.

Only the hardiest have survived.

Only a few hundred Trakehner horses of the original 80,000 in East Prussia were available by the time the rebuilding process began. For though between the Trek and various other evacuation attempts, almost 1000 horses had actually reached the safety of West Germany, most of them were eventually lost to the breed.

Registration papers of many horses were lost, but mares carrying the moose antler brand were known to be fullbred Trakehners, and therefore, accepted as such into the reestablished registry. Still today, in the earlier generations of Trakehner pedigrees, one can occasionally find a horse with unknown ancestors but with the notation, “mare branded with double (or single) moose antler, papers lost due to events of war."
Slowly many of the surviving Trakehners were located and accounted for under the able leadership of the Verband's first president, Baron von Schroetter, and its manager, Dr. Fritz Schilke.
All modern Trakehner horses in the world today can trace their ancestry back to these individuals left in Europa after 1945.

In 1950, the German Federal Government recognized the great effort being made by these breeders to preserve their East Prussian heritage and agreed to join with the government of the state of Lower Saxony in providing support.
Occasionally, as the East Prussian Stud Book Society and the Main Stud at Trakehnen did before it, the Trakehner Verband still uses carefully selected Thoroughbred and Arabian stallions and mares to improve and refine the breed, but only Thoroughbred and Arab blood is used.

The famous Trakehnen- born chestnut stallion, Abglanz, renowned for his ability to sire performance horses, was not only a major sire in the modern Trakehner breed but founded a very important line of Hanoverian stallions as well. Another example is the United States Dressage Federation 1983 Intermediaire I Champion Chrysos, who is a Westphalian stallion.
He was sired by the Trakehner stallion Condus.

Unlike all other Warmblood breeds, the Trakehner has a closed studbook and avery specific tyoe which has existed for over 300 years. Where other Warmbloods (such as Hanoverians or Dutch Warmbloods) are  registered according to the region in which they are born, the Trakehner
has to be of a certain genotype and phenotype.

The German Trakehner Verband (GTV) governs the Trakehner breed. The GTV is the modern follow-up organisation of the Easter Prussian Studbook Society (wich ceased to exist after World War II). The modern GTV was founded in Hamburg in 1947 and is the only body to register, brand and officially approve Trakehner breeding stock worldwide.

How the Trakehner came to Claratal

This website uses cookies to improve your experience while you navigate through the website. Out of these cookies, the cookies that are categorized as necessary are stored on your browser as they are essential for the working of basic functionalities of the website. We also use third-party cookies that help us analyze and understand how you use this website. These cookies will be stored in your browser only with your consent. You also have the option to opt-out of these cookies. But opting out of some of these cookies may have an effect on your browsing experience.
Necessary Always Enabled
Necessary cookies are absolutely essential for the website to function properly. This category only includes cookies that ensures basic functionalities and security features of the website. These cookies do not store any personal information.
Non-necessary
Any cookies that may not be particularly necessary for the website to function and is used specifically to collect user personal data via analytics, ads, other embedded contents are termed as non-necessary cookies. It is mandatory to procure user consent prior to running these cookies on your website.
SAVE & ACCEPT